6 Years of Natural Weaning in 5 Steps


I breastfed our son, on cue, day and night, from the day after his birth.  (You can read about the unpleasantly exciting birth in my previous Carnival post.

When he started signing for milk when he didn't want milk but just wanted me to stop everything, I had to laugh and learn to respond to that a bit differently.

With our son, I learned at La Leche League that breastfeeding is far and away, bar none, no contest, baby, the best and easiest way to ease a growing child's journey through our rough, tough world.

Recipe
Result
Magic like that is worth holding onto.

So it was all "milk and who cares about honey because hey, there's milk" for the first two years of our son's life.  My pregnancy with our daughter was his first real experience of weaning - he was a few months past two when he noticed:
Reportedly, many children fully wean during a pregnancy, but our son simply adapted to all the changes.  Long breastfeeding sessions were too painful for me, but two-year-olds don't have a great need to breastfeed for long either.  He accepted the limitations, learned some manners, and we both just kept on bonding.

I knew that I would be too tired with one newborn to also respond to our son at night.  Our son did not like sleeping by himself in a separate room, and he was a frequent waker.  (I moved him from my room due to my hyperalertness from PTSD, and I still can't help wishing it could have been different.)

We had already reached the stage where the breastfeeding response at night was very brief. Now we began Daddy Duty - when our son awoke lonely at night, he was comforted to sleep again by Daddy instead of me.

While our son did not embrace the change with joy, at the age of two he was able to accept it - the level of distress was manageable between him and Daddy.

I knew there could be times when the new baby would need me at bedtime.  While our son could go back to sleep during the night with Daddy, I still always breastfed him to sleep at bedtime. I needed to go off duty.

This was probably the roughest toughest weaning we did.  One evening, I breastfed him (now 2y 9m) and then went to visit my sister's house - and only came back when Daddy told me he was now asleep.  It was pretty late.

But I knew he had Daddy with him.  And I knew he was not 3 months old, or 6 months old, but not far off three years old, with years of my love and strength behind him, the communication skills to express his emotions, and the knowledge of other means of comfort.

This isn't to say I never responded to our son at night or fed him to sleep again because of his new sister. But now he and I both knew he could do this without me. 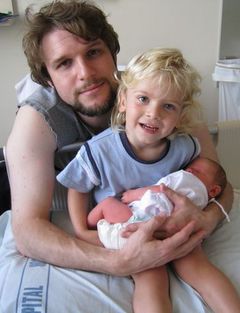 I was again in the hospital for an emergency surgical birth of our second child, so our son had to do without me for a few days. It was brilliant having him visit in those early days of milk engorgement - a newborn hardly makes a dent but a 3 year old?  Bring it on!


It may be that our son broke my waters early because I did not insist that the bouncy boy be super careful with my pregnant body during morning feeding sessions. Undercooked babies are often extra hard work, and if there's any chance that this warning could help someone else, it will be worth it.

He generally understood the new rule of Baby Goes First: he still got to breastfeed but the baby needed milk more as that was her only food.

Sometimes I actually tandem fed - both at once - but it was physically uncomfortable to hold those positions.  And usually at least one of them was wiggly enough to make me nervous about going two directions at once. So normally, he just learned to wait his turn.

Age 3, age 4, age 5, still awaiting his short turn at the breast in the morning. Sometimes patiently. Often he would get a short nighttime feed on one side before I took his sister for the long feed to sleep.

But there were sleepovers at Grandma and Grandpa's or with school friends. He didn't miss me when I wasn't there.

And then he would get up and be more interested in a joke book than whether he got his turn.

And not long after he turned 6, he often complained he couldn't get very much.  With his sister (3) feeding only a few times a day now, I'm sure the leftovers were pretty low.  I told him that it was because he didn't need it very much anymore. I mentioned how lucky he was, and that probably none of his friends had gotten milk for this long.

Soon after that, I asked him if he was OK with not having milk anymore.  No problem.

Was it hard for me to stop after all these years? Well, he was getting pretty big and developing a real big kid attitude.  It was always very quick and even starting to feel not quite right anymore. It really was time.

He has a couple of times wistfully said he wishes he could still have milk. He still loves to get lap time, whenever we can and especially when his sister is getting her short feeds. 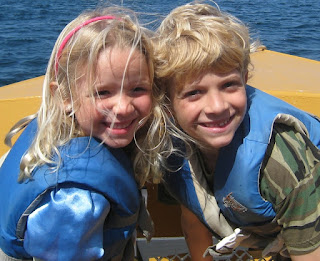 Thank you for visiting the Carnival of Weaning hosted by Dionna at Code Name: Mama and Dr. Laura at Aha! Parenting.
Please take time to read the submissions by the other carnival participants (and many thanks to Joni Rae of Tales of a Kitchen Witch for designing our lovely button):

(This list will be live amind updated by afternoon May 21 with all the carnival links.)