If you haven't yet heard about Kathleen Tuite, Feminist Hacker Barbie and her awesome backlash against Mattel's book “Barbie: I Can be a Computer Engineer,” this Wired article is a great place to start.

Then visit the site, view the original pages, and rewrite the book for all our sakes.

(And btw, her mom and my mom are friends, so I'm pretty sure that makes me cool too.) 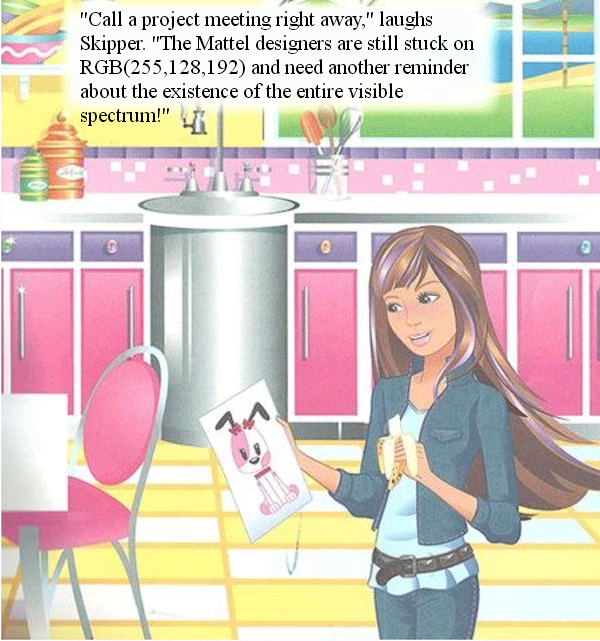 Pin the sexist shirt on the comet's tail 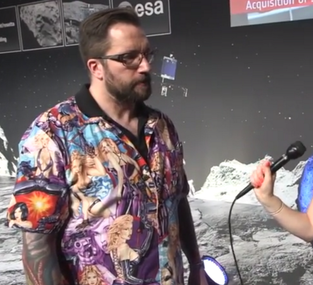 The amazing news of the European Space Agency's Rosetta mission landing on the comet has burst onto the scene. Even more colourfully, so has the shirt of Mike Taylor, the talented Rosetta scientist who appeared in the media.

(Will we now have the "Rosetta Shirt" to go along with the famed "Rosetta Stone?")

I studied tech and worked in tech industries for more than 10 years. Then, as now, the techier it got, the more men worked there, and the more casual the dress code. Not suit and tie, but T-shirts and cycling gear. New Zealand is pretty relaxed. They were not the most politically careful people around.

But not one of those men would have worn a shirt like that to work. If they had actually made such a bad call, they wouldn't have made it down the hall before somebody responsible would have gently but firmly reminded them how inappropriate it was.

If I interviewed for a company where I saw someone wearing such a shirt unchallenged, I would have known there were problems.

So scientist dude Mike Taylor put on a shirt covered in fantasy cartoon body babes, went to work, and made it onscreen without anybody around him noticing a problem. This is a workplace with an ingrained sexism problem. This is a classic real life illustration of this gender-divide study in technical fields. In a way, Mike Taylor has done us a favour by showing how invisible sexism is to him and his field. And I salute him for apologising for his mistake.

Mike Taylor's response is more enlightened than the people who have blamed the feminists for the problem. Apparently the shirt was not the distraction from the major scientific accomplishment - it was those who complained about it.

On the world stage

Like it or not, ready or not, Mike Taylor just appeared on the world stage. In a recent show I was in, the director asked one of the supporting actors to remove a hat supplied by wardrobe. Obviously wardrobe loved the hat, and the actor also loved the hat, and it looked dramatic, so what was the problem?

Well, the hat was so big that you couldn't stop looking at it and pay full attention to the scene. It was like, there were three on stage: the main actor and the supporting actor and her hat, and the scene only called for two. When a piece of clothing, like that hat or that shirt, has its own personality, handle with care.

We should only have been hearing the awesome space message. Some director just had an epic fail.

What if the white guy's shirt had jolly drawings of black people in rags pickin' cotton? Would objectors have been labelled bullies, as the feminists have been? Would that have been "not actual racism"? Would anyone say, "If black people let something like this put them off, they shouldn't work in the STEM fields."

News flash. Black people are also largely underrepresented in STEM fields. Perhaps secretly white men prefer them in the cotton fields. It's no secret that too many still prefer barely dressed fantasy women to real women challenging them in the real world. Is this an offensive stereotype? Yes. No fun, is it?

Basically, what that says is, "If you can't handle that STEM fields are sexist/racist, you shouldn't work there. Don't complain!"

Even Star Trek changed their motto to "boldly go where no one has gone before." Little by little, oppression could become invisible because it doesn't exist anymore. But it won't happen if we ignore it.
Posted by @miniMum at 10:35 AM 5 comments: