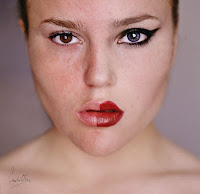 "To sell beauty products, advertisers must constantly convince you to fix, update, or conceal something about your natural look. This sends the message that the authentic you is repulsive. Problem is, the "perfection" in ads, catalogs, and movies is mostly computer-generated, always changing, and unrealistic...."

Check this site out; you'll learn a lot.

Digital manipulation is insane and indefensible. We are being shown images that are not real, and deep inside our brain is filing away the data. But the photos I found most striking were the very few celebrities who were genuinely au natural - with no makeup.

You're not stupid. You know Hollywood and the media are not real. But something inside you is probably still surprised to see it. You are constantly being shown images that are not real, and deep inside your brain is filing away the data.

Makeup is performing a low-tech version of the digital crime of airbrushing. It's a great reason to stay away from mass media, but it's been in everyday life for centuries too. We often don't want to accept that we look like that too. We are image-conscious - conscious of what we look like, captured in a media moment.

"fix, update, or conceal something about your natural look" "the authentic you is repulsive"

I welcome all comments on this anti-social idea, but one I expect to hear is:


There's nothing wrong with looking a bit better with a bit of makeup - it's just part of good grooming.

We all understand what we expect to see when a woman is "making an effort" or "is really well-groomed." The image generally includes makeup.

Strangely though, men are able to be well-groomed in daily life by being clean and tidy. Even when their eyes look just the same size as when they had breakfast. When their skin looks like their skin, instead of polished porcelain or smooth brown acorns. When their lips are...lip-coloured. All day. That's what we expect. (Shaving? Good point, related but separate issue.)

It's a complex issue, but in our society, when men wear makeup, they're often considered gay or vain. So since it's not only acceptable, but an improvement, for women to wear makeup to look really good, does that mean being vain is considered part of womanhood?

Would you go makeup free for a week?

If that's too shocking for you and the world, would you go with less each day until you faced the mirror and the world with no makeup, beautiful as you are?

You may have many reasons why not. Here are a few great reasons to do it.

With the time (and money) you save on makeup, you could adopt a daily habit that would change your health and your look from within.
That's a makeover you can keep.

Comfortable in your skin

When you are feeling confident, strong, happy, and engaged with your life, you are beautiful. The rest is just made up.

When I went vegan, leaving the eggs in their basket was one of the easy bits. I soon discovered I didn't need eggs for baking (whoa), and I managed to do just fine without egg-heavy meals. But there are a few eggy dishes I remember fondly. So when VEGG asked for reviews of their vegan egg yolk, I rolled right up.

(Check out another great Kiwi VEGG review! For the record, I don't think I'm nice enough to share my French toast with the hens.)

The VEGG mixed up easily, just as instructed, and I stored it in the fridge.

The egg industry got their catchy results by studying a diet with a lot of other cholesterol-rich foods. Add an egg too? Not much more happens. But eggs are by far the richest source of cholesterol, and plenty of studies show eggs raise LDL cholesterol and your risk of a heart attack.

The VEGG package gives a recipe for French Toast, so this was the first eggsperiment.

Snip opened the package, and, "Whoa, this smells like EGG!" Was I a bit silly to be so surprised? I checked the ingredients for sulfur, but I think it's the black salt that has this.

I made this recipe twice. The first time I only added half the required liquid, having stopped skimreading at "add 1 1/2 cup of soy milk" and missed "and 1 1/2 cup of water."

It was very goopy, but matched my memory of making French toast with eggs.

The second time, I made a lot more French toast! 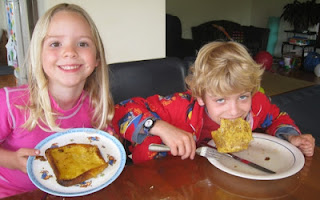 In fact, I need to season my cast iron pans, so I was frustratingly unsuccessful with my frying. I eventually got out the toasted sandwich maker to make tasty golden-brown (if somewhat flat) French Toast.

Egg salad is something that I do miss. This was on my radar to make, the instant I heard about this VEGG stuff. But I needed to buy vegan mayo and tofu, so we had some delays.

Then we had more delays when I bought tofu, and my son said, "I love tofu! Make some of that tofu for tonight!" A symphony for a vegan mother's ears, so another day, another tofu shopping trip.

I also could only find one brand of vegan mayonnaise in the shop, but I figured that would be OK.

It all went as planned:

During my lowfat vegan years (not eating mayonnaise), I forgot that I hate sweet mayonnaise. I was always a Best Foods girl, and this vegan mayo was more of the goopy Miracle Whip variety.

So I will try the recipe again using Nayonaise, which I have enjoyed. Stay tuned...

Yes, absolutely. This product definitely does what it advertises.

It's available at many outlets worldwide and at the Cruelty Free Shop in New Zealand. You can order it online. It seems expensive, but it goes a long way and keeps well.

School bus vs school run - an adventure in public transport 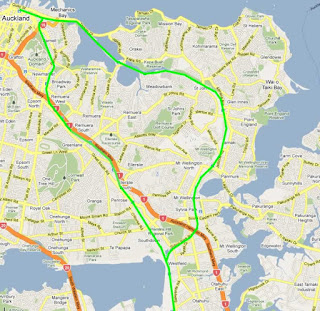 While there are no signs of us giving up our two-car-family status, I still dream of alternative transport.

And I have been inspired by Straphangers, a book that raves about public transport but also about how cities worldwide develop based on their transport systems.

I wish we lived closer to my child's school, and thus could bow out of the short but inevitable daily school run. But my antipathy for moving is even deeper.

When I was a child in the US, we had school buses. They ran several shifts a day, for various ages of students. I'm a real fan - I think that Aucklanders should stop complaining about congestion and danger around schools and look at investing in these.

The school bus system in Auckland is variable, at best.

However, there is an ordinary bus system.

We adults are quicker to see the disadvantages of public transport. But our much-carted-around kids think riding buses and trains is super cool.

Our local online info service shows me a couple of possible buses at good times to get to the school. The buses are not at the closest stop to our house - still about a kilometre away - but the bus stops right outside the school.

On the one hand, a kilometre means I still need to go with my child to the bus stop. On the other, the school is over 5 kms away, and the dropoff there is in the crazy busy school zone instead of a pleasant beachside road.

At $0.90 for a child fare and the current cost of fuel, I estimate that the cost will be about half of driving.

I don't know when I will actually recoup these costs. At the moment, I'm still in the stages of introducing my child to the bus trip, so I pay to go along with him. It's an investment.

If this succeeds, eventually I hope both children can travel together, which is higher cost.  But it's still close to cost-neutral compared with driving, and the money is supporting public transport instead of just the fuel companies. 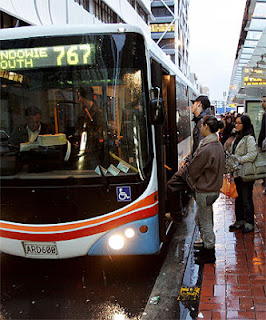 A late bedtime the previous night makes the boy grumpy and resistant to everything - school, riding a bus, you name it. The preschooler is also along for the ride. We find a parking space on a side street less than a minute's walk from our stop.

We learn some real lessons.

I carefully give our son exact change for the bus (as we had not bought a pass for him yet). He later assures me he has it in his pocket. However, by some evil magic, the money is gone when the bus actually arrives. I have no other small change.

Since I paid for myself with a pass, the bus driver kindly just lets us all on. On our way at last.

The kids are intrigued by the unusual occurrence of the bus driver backing up in a narrow suburban street to make a turn he misses.

In my concern not to miss our stop, I get us off one stop before the right one - cue complaints from Mr Grumpy about the 100m torture trek to the school.

Preschooler and I soon get our bus back to our do-it-yourself park'n'ride with no incidents.

Mood much better all around. It is just me and my schoolkid, and I keep firm hold of the bus fare myself. There are no bus backups, and we even get the stop right across from the school.

By this time, I've bought him a bus card of his very own. He enjoys using it to make the system go beep.

We are now relaxed enough for me to ask him to pay attention to the trip. When he travels alone, I will make sure we tell the driver where he needs to go (in case the uniform isn't enough of a clue). Bus drivers are usually helpful about this, especially if it means they don't end up with a child stuck on their bus, and this is a quiet route at this time of day.

We see one other child from his school travelling alone.

And then we have to stop for the summer holidays.

I am optimistic about our progress, but I have no fixed idea when he will want to travel on his own. I also don't count on jumping right back into it after a long holiday. I don't mind because you know what? Riding the bus is a lot less stressful than driving the school run.

But he agrees to a very mild suggestion that he might ride on his own today. He says, "not many other kids have their own bus card, I bet" and loves how we attached it with a lanyard to his bag. So we all take the leap of faith - it will be tricky if he gets nerves at the last minute, because if I and our preschooler have to get on with him at the last minute, that will make her very late.

He is a bit startled when the card comes free from the lanyard with his enthusiastic tug, but we both remember to tell the driver his destination. Soon he is sitting carefully in front and ready to go. And as the morning wears on with no report of a truant child, I relax.

At the end of the day, he says it was really fun and cool. He and his friend can't wait to tell me how his friend saw us at the bus stop (while in their car), and him in the bus, and caught up with the bus near the school. And that her mother might even try to get her riding the same bus too.

We miss the bus.

What would it take to get you on a bus?