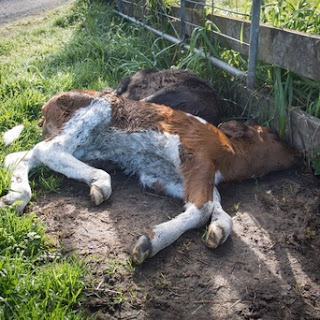 Shocking footage, as published on TV. And further unaired footage, from Farmwatch.

Of course, it's only shocking if you haven't been paying attention. For decades, investigative psychic geniuses, I mean, animal activists like those at Farmwatch always manage to find the only tiny .0001% of farms where terrible, horrible, no-good very bad things are happening.

When the government organisations like MPI in New Zealand somehow can't find them. Or do anything about them.

The news has gone worldwide. And the reactions come flying. All versions of:


"Please please don't make me feel guilty about this."

Everyone wants to blame somebody else for those adorable horrible dead-eyed baby animals.

Those 99.99999999% of dairy farmers who naturally love their animals flap their hands accusingly at the transport operators who have let them down. Who knew that animal transport workers leave the calves for hours at the side of the road? Or fail to cuddle the baby calves gently into padded baskets in the backs of trucks?

Something must be done to those bad people! (And now it will, thanks to the media attention.)

And the farmers post kissy pictures of themselves with animals...who are still alive and conscious enough to enjoy their photo op.

Actually, it's the activists' fault, for publicising the covert pictures. That's illegal! Fonterra is "very disappointed". No, it's the TV station's fault, for not presenting "the other side". After all, it's not fair to just show the tiny tiny minority of bad stuff found by the investigative psychic geniuses. 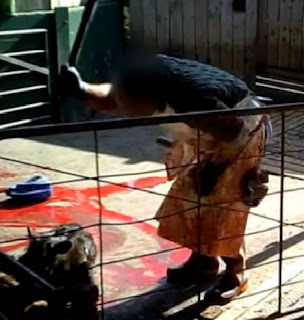 Fact: the dead baby calves have always been a part of your glass of milk. The money from the sale of the baby calves is just as much a part of dairy farmers' shaky profit margin as the highly-publicised milk powder price. And where there's profit margin, there's a margin to cut - i.e., the time spent getting those pesky calves into those trucks, and into the slaughterhouse machines, as quickly as possible. Having the calves reduced to weak and unresisting objects is good for the economy.


You know what they say in show biz. Never work with animals or children. Baby animals must be the worst.
This is the price of your cheap milk and cheese.


Now we see the violence inherent in the system. And it's ugly. Luckily, there are so many options instead of cows' milk.