Generosity - for emergency use only? 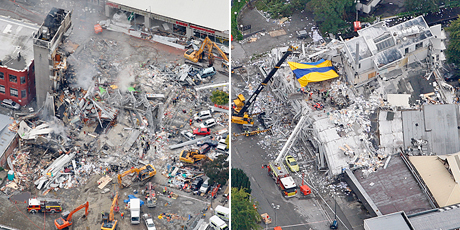 All of New Zealand is pulling together to help Christchurch out - yesterday was a massive aftershock from the quake they suffered in September, but much shallower and closer to the city, plus during the day.  They are still not sure how many of the missing people are trapped or dead, but 75 bodies are already reported.  A national emergency has been declared.

Even here in Auckland, many miles away, we are being asked to help in many ways - even open our homes to people who have been suffering aftershocks for months and now have only tents to live in.

This is, to say the least, uplifting.

Ironically, the government is also today discussing a major review of welfare policy that would force beneficiaries who have health problems or small children to compete in an employment market where the fit and well are going jobless.  This is to address a perceived problem of growing dependency on benefits.

If only generosity were not so carefully saved for emergencies.
Posted by @miniMum at 7:46 PM No comments: 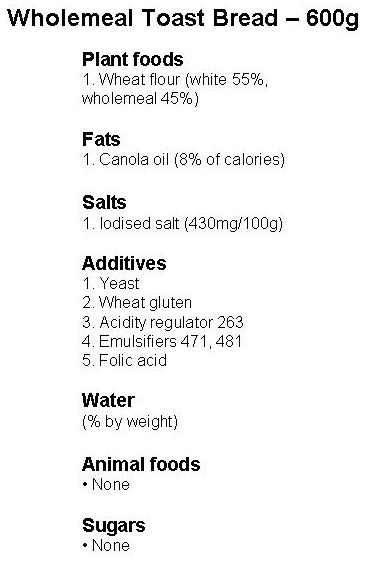 Would you rather have a big photo of wheat fields on your bread or this label?

Read more about this revolutionary new way of knowing what you're buying...
Posted by @miniMum at 6:27 PM No comments:

Ads - what are they good for?

Read more over on Vegsource - enjoy!
Posted by @miniMum at 11:36 PM No comments:

A utility closet you can use...

I'm remembering to take Before pictures when the decluttering bug strikes!

Both DH and I hesitate to throw away big bottles... a big case of the Just In Cases.

Would you believe there is a rubbish bin in this laundry room and the recycling bin is but a few steps out door #1 behind the little lady?

The transformation didn't actually take long and DS and I even wiped down the shelves.

Yes, that's more like the number of items that we need for washing our clothes.  Isn't it astonishing how long we can live with a ridiculous situation?

The recycling bin got several armloads.

Homes for the homeless
I can now store our chilly bins (US translation: ice chests) on that tall bottom shelf instead of stacked next to the spare freezer.

More success for my digging deep method:  target hidden spaces because that's where you hide unused items.  Visible clutter is more often useful things without homes.  Get rid of stored junk and voila!  homes for the visible clutter.

Even extra laundry can be more fun with this sense of accomplishment!

What do you cling to Just In Case?  What busy corners of your house have gotten a bit too busy?
Posted by @miniMum at 7:48 PM No comments:

The final frontier - saving Planet A 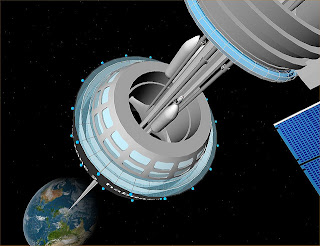 Explore space with me over on VegSource...
Posted by @miniMum at 1:35 AM No comments: 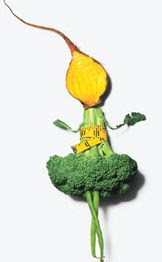 More food for thought over on VegSource.

Toys - in with the new, out with the old

After listing our Top 10 Toys, I ruthlessly culled another lot of less-than-loved clothes and toys. 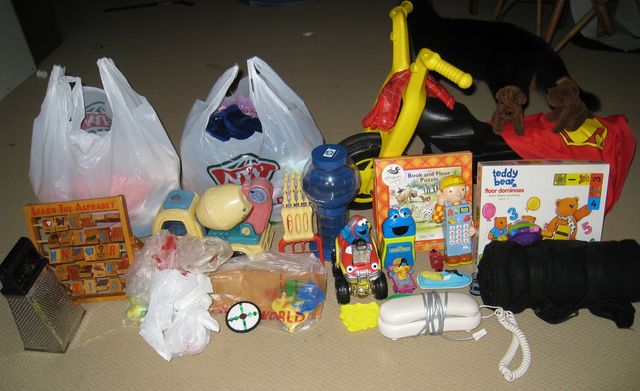 Kids, don't think of this as losing toys.  Think of it as being able to see the rest of your toys!

I made some tough choices here because I've already done so much releasing - some of these are pretty cool.  But I thought about whether a toy entertains either of the kids for as much as five minutes, and that helped.  Some toys (like the black and yellow motorbike which really is Super) just can't compete anymore in the pile of new scooters and real bikes.

So along with Red snail, Blue snail, Yellow snail, and Green snail and other favourites, they can make some other younger children happy now.


I also threw away a magnetic drawing board that was broken but still limping along.  It's quite hard for me to do that but our shelves look better already.

For those who don't have children, this may seem a strange and pitiful activity to brag about.  But life in our house improves with every item that is gone and not missed, and that is truly an art.

Do you discuss it with your children when toys need to go?
Posted by @miniMum at 8:30 PM 2 comments:

I've been a vegan for about 15 years now, starting from my first introduction to Dr McDougall's programme, and in the past have been very involved with (ie, spent too much time in the office posting to) the VegSource site.

The news is that I am now going to blog for VegSource!  My first post is an updated version of my latest blog on Oprah, and if you look now, you can see me featured on the front page as well as posted in the Celebrities tab.

I'll link my food-related blogs from VegSource back to this blog, and carry on with the minimalist torch too.
Posted by @miniMum at 5:07 PM 2 comments: 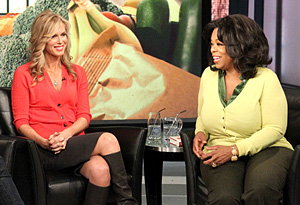 Oprah and her staff complete a one-week vegan challenge!

It's good publicity for the vegan cause, and you couldn't get more mainstream.

But
The results
There were some participants who said they would  continue, and another seemed really happy with his weight loss.  We didn't hear from Oprah on her future plans. No "I'm never going to eat another animal again!" moment.  That's a shame, because she has real pull.

There was some lip-service about "awareness" but it would be interesting to do a followup one year on to see if anything sticks.  We all know about honeymoon periods for changes in diet.

The food
Michael Pollan (Omnivore's Dilemma, In Defense of Food) and Kathy Freston (The Veganist) were the resident food experts.  They wouldn't have been in my top 5 choices, but they do have some real credibility.  But for all the pictures of fruits and veggies, and declarations and more on how packaged and processed food was a major problem (for Michael, more so than meat), the menu was chock full of highly processed tastebud tickling vegan treats.  Meat and cheese substitutes twice a day and "Here's a smoothie with broccoli so you won't have to taste it..."

This was the vegan diet that meat-eaters try to beat us up with when they say "vegan diets aren't necessarily any better for you or the planet than eating meat."

Those horrible facts
Their slaughterhouse footage was sanitised and you could see the reporter becoming acclimatised: from her thoughtfulness when looking at the hopeless bored feedlot cows, watching them march through a calming tunnel to their deaths, horror when watching the bolt through the heads (not allowed to film that of course, or the sticking to drain all the blood out) and the flaying of the corpses, to a state of calm or relief as the cows were cut into pieces of flesh that looked familiar - you'd see that in the butcher or supermarket.

Compare this with the avalanche of footage captured when activists come with their cameras unannounced. 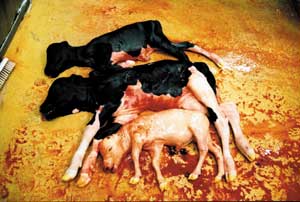 Grade?  C-
This is the "vegan challenge" designed by people who don't believe that anybody could really like a healthy vegan diet.

This is the "vegan challenge" taken by people who feel no personal motivation to become vegan.

But extra credit to Oprah for bringing the message to so many, and having her whole team experience the possibilities too.  I'm glad she did it.

How would you have designed this challenge?
Posted by @miniMum at 2:07 AM 2 comments:

Last night as dark was falling, we were all confused to hear loud knocks on the door.  I grumped down the stairs in my nightgown with the kids in tow to find a courier, a woman about my age, with a small parcel in my name.

I racked my brains to remember what I'd ordered, and while juggling the parcel and the signing hardware, I said testily, "Bit late to be delivering parcels!"

There is always another story

A few brief words, in good but not native English, by a woman alone who was still working hard for very little money when I was settling in for the night with my family around me.  My brain is ashamed of my first instincts.  I didn't need to add to that woman's burden.  My attitude didn't help me or her.  So, belatedly:

Could we remember the other person's story before they have to tell it?

If we gift everybody with the benefit of the doubt, we gift ourselves with calm and peace.
Posted by @miniMum at 11:50 AM 2 comments: