TPPA Day: Public protest may be hazardous to your health! 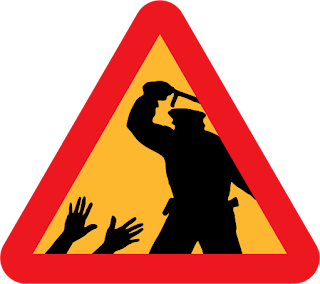 Trending and apparently news to some politicians - the US Consulate regularly warns citizens in foreign countries about large organised political actions. I've received a generous handful of these in recent years. I worry very little about it.

This is the country that invented "those warnings" on product labels.

In the latest example I received, gone viral in the news:  [translated loosely]

The U.S. Consulate General in Auckland alerts U.S. Citizens that [TPP march is happening] [Lots of scary people][Stay away or you might hurt]

[We care about y'all. Be careful out in those foreign places]

Contrary to popular comments, it's not an indication of an organised police backlash or terrorist action. At least, it wasn't the 6 times before when I got a warning about dangerous protests. But it is beyond hypocritical.

Is it the cop or am I the one who's really dangerous?

The New Zealand police are no angels. But let's get real. For 2015 so far:
And they're sending us a warning?

I reckon I'll be pretty safe today, even should I be in the middle of Queen St in today's protest, dressed in a prescription drug costume (or draped fetchingly in a new flag design) and waving a big banner with TPPA GO AWAY!