Why this vegan won't go to Hell

Recently, my network feed from my local vegan friends and vegan boards have been dripping with pizza selfies. What's the news? Hell Pizza with the brand new addition of Angel Food's delicious vegan mozzarella cheese. I have eaten Hell Pizza before, but they are expensive and gourmet, and I'm a frugal gal, so although they are just up the road we don't often meet anyway.

But we won't be meeting anytime soon, in spite of the vegan cheese. I'm in a minority compared to the Hell-ravers, and I don't enjoy feeling in conflict with a business coup for a well-loved vegan business, but here we go.

Hell of an advertisement 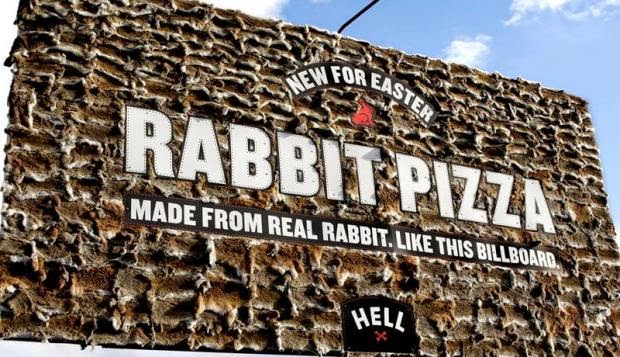 Hell Pizza's name and image is based on exploitation of Christian ideas. Because only a minority in New Zealand take religion seriously, Hell is able to appeal to the majority by using those familiar ideas lightly with that hint of sacrilege to spice up their commercial presence and grab attention.

That's just how they roll. So no surprises really when they advertise rabbit pizza with a billboard of actual rabbit skins and lamb shanks with a cartoon "lambputee". This little lamb came out right before the vegan cheese deal and pushed me over my personal limit. I will get my pizza elsewhere.


Who the Hell cares?

At the end of the day, none of this matters much. But this sort of advertising represents the sort of over-the-top satire about animal rights often summed up as "MMMMM...bacon".

Some vegans believe that rabbit skin and legless lamb ads encourage us to connect the dots with animal production and use. Unlikely. Hell pays to design ads to increase sales, not make their loyal customers question their food. It's far more likely that the advertising focus groups showed that this level of satire encourages meat-eaters in their recognised defense mechanism.

Few people walk around draped in furs, and everybody knows that the lambs don't haunt the paddocks with prosthetic legs. The absurdity is a shared joke that avoids consideration of the reality.

I know, I know. Hell has always offered an unusual range of gourmet vegan pizzas, and now they're offering vegan cheese too!

But Hell's ads show me that they are confident in offending the minority of animal rights supporters, just like  Christians (and amputees, and who's next?), and still sell lots of pizza to those who overlook or even enjoy such jokes at other's expense. Controversy stimulates sales, so offending a minority is a win-win situation.

Hell offering vegan cheese may be a shining example of how far veganism has come. Another sign of how far we've come is how other pizza places (Domino's or Pizza Hut) don't even blink when you order a pizza with no cheese - and then perhaps add your own Angel Food mozzarella at home.

And if you're a vegan who still wants to support Hell, please consider, between mouthfuls of pizza, sending a message to them about the message their advertising sends to us.