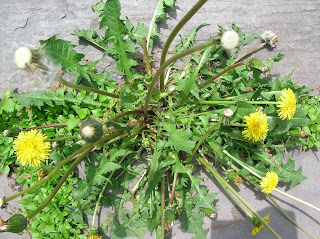 "You have some lovely dandelions," said my mother. "Yes," I thought, "the yard is full of them." "So, do you mind if I pick some for lunch?"

But I think Mom would be proud of me now. I've discovered the joys of harvesting wild greens in my own backyard.

Since I got braces, I can't indulge in my usual crunchy carrots, apples, or even a basic lettuce salad. I believe that food is best eaten in its natural state, but I've had to compromise on this one. 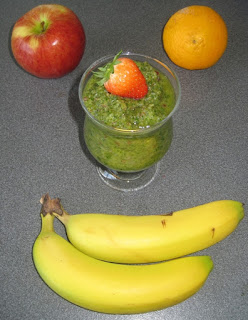 I got apple back on the menu in the mornings by processing a couple with a soft banana and eating the result like a lumpy pudding. That way, I still get the fiber as well as the juice. And then I remembered green smoothies.


I can eat so much bitter raw nutritious green stuff, with pleasure, combined with sweet fruit like apples, bananas, and oranges. I used storebought cabbage and garden kale and parsley. And when those started to run out, I looked outside the garden box and saw those lovely dandelions. Thanks Mom!

I can harvest a couple of cups full of dandelion greens any morning I choose - easily equal to a package of greens from the store. And I finally remembered I have mint growing wild in the backyard. It's not just good for free tea, it's a nutritious yummy green leaf.

As our local vegan nutrition expert said in our last Vegan 101 class, the biggest problem with greens in your diet...is eating them.

Resources for learning about gathering wild greens are as common as weeds - there's even one for New Zealand. Hey, we've got puwha growing in the shady spots!

Would you ever gather your backyard bounty?
Posted by @miniMum at 5:09 PM 2 comments:

The REAL reason not to eat animals is...

In honour of World Vegan Day (and Month), we are going to sort it out once and for all. The real reason not to eat animals is definitely:

Obviously, it's the animals!

Veganism means man has no right to exploit the creatures for his own ends. That was Donald Watson's whole point.

Every year, tens of billions of animals exist in hopeless conditions, are literally tortured by their keepers, and die horribly, simply to feed humans.When animals are bulk commodities, animal abuse for money will be the rule, not the exception.

How can you be an animal lover and eat animals?

OK, we sure don't want to hurt animals, but not all farm animals are treated so badly - some farms are very kind. The human beings you know and love are more important. When your family and friends eat animals, they are much more prone to heart disease, cancer, diabetes, obesity, food-borne infection, and a host of other chronic and deadly diseases.

This is not only horribly sad for us, but impossibly expensive. In the US alone, healthcare costs are upwards of a trillion dollars and rising fast. We never seem to have enough money to do the important things. Let's save lives and money.

And what about the humans we don't know? 60% of humans in other countries (or even our own) do not have enough to eat. We're not helpless. From a Cornell ecologist...

"More than half the U.S. grain and nearly 40 percent of world grain is being fed to livestock rather than being consumed directly by humans..."

Plant foods simply cost less to produce, which means more people fed. Please, don't feed the animals, feed hungry humans instead. It's the least you can do, and the best. 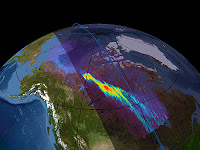 Actually, the big picture is paramount. We all have to have somewhere to live, or all these arguments about ethics and health just end up as details.

Intense animal agriculture is the number one reason for deforestation and soil runoff, and excess animal waste is polluting natural waterways and land alike. Farmed animals are crowding out native wildlife, upsetting the entire natural balance of the world.

There is no Planet B. Eating animals like this is unsustainable. That's what's important.

One of these viewpoints may well seem strongest to you - it may have been what changed your mind. But to turn the tide on animal consumption, we must stop competing for the right reason.

We are a tiny and underfunded minority, and can't afford to fight vegan wars. When we cleverly undermine other vegan points of view, we mostly provide ammunition for the mainstream to dismiss us entirely.

They're all good reasons. Each one appeals to different people with different values. Together, they're compelling. We need that wide appeal...if we want a vegan world (and not just World Vegan Day)
Posted by @miniMum at 1:30 PM No comments:


Vegans, make the most of the media frenzy over Bill and Lou, the Green Mountain College mascots. Rarely have animals been so featured as individuals, esteemed and named, yet destined for slaughter under the public eye.

Here's a picture worth a thousand words for your friends and family... 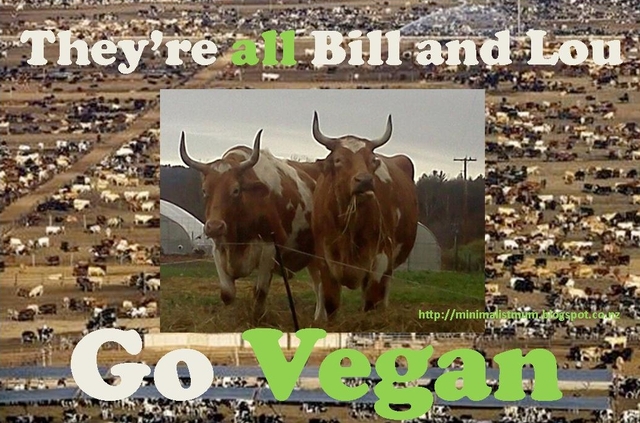