It's no surprise that 1/4 of these 8 Habits of Organised People involve decluttering. And even though I've been far too quiet lately, the decluttering has continued...and it's grown!

With the goal of decluttering professionally, I have decluttered at my sister's house (hopefully more on this later.) I am also decluttering for an entire club.

As the new president of Explorers, I have a serious job on my hands. The previous long-serving and super hard working president is also a confirmed packrat, who doesn't think we should get rid of anything if we've spent money on it.

No prizes for guessing what the club storage cupboard looks like.

Along with the overstuffed shelves of activity resources, we have three library carts of books and games. Rather, we had about five carts' worth stacked onto three carts.

In home decluttering, you will encounter resistance from those attached to the stuff. At an organisation level, it will be worse. You will hear all the usual enemy whispers, this time on behalf of the organisation.

We have a treasure trove of super cool stuff in the cupboard. Here is why the club agreed to declutter: 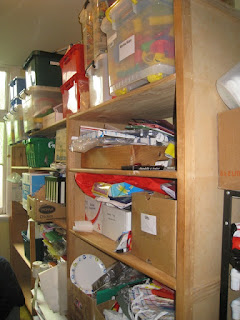 The storage cupboard was so full that things only fit tightly packed in a few ways. Only one person really knew where to find things and where to put them away again so we could slam the door closed at the end of the day. Nobody else was sure of navigating the cupboard, and nobody wanted to.

This is a dangerous state for a club to be in!

Every activity day needed a major extra commitment simply to take out materials and put them away again. Often we would still be setting up and in a rushed mess as people arrived.

Because only one person knew the right way to pack up (but often other people had to put stuff away anyway), the storage cupboard needed regular reorganisations (at least once a year) where many people stayed for hours to take everything from the cupboard and put it all away again.

People aren't too keen about this. Constantly shifting and sorting stuff is not a rewarding volunteer job. 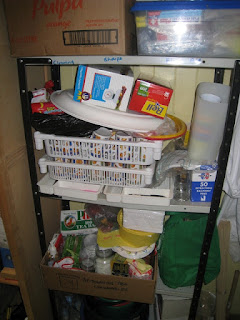 For example, on our library carts, we had books in every crevice. Books stacked on top of each row of books plus piles on top. It was too heavy for one person to move. There were so many games that they spilled off the sides.

And when we moved them in and out of the cupboard, stuff on the edges got crushed against everything in our way. Of course, we had to pile other boxes on top of the books and games carts to get the cupboard door closed. 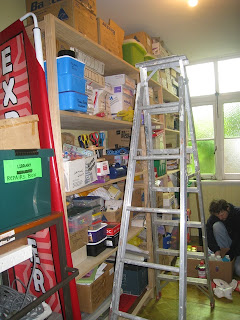 Our librarian defined a purpose for our library. This meant when we looked at a book or game, we could see it in the context of its use for our club, not just how cool it was.

We also took into account how easy it is for Aucklanders to get books from our public library.

The games and books now fit on their carts. 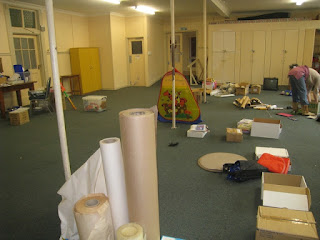 I didn't know what was on the shelves, but my purpose was at least to
This is still a work in progress. We only got through about half the shelves, and we took out lots and lots of stuff.


What happened to the stuff?
It's at my house. Good thing I'm an expert declutterer.

We sold some for about $400 at our annual Open Day, and a few large items sold on TradeMe. We are donating the rest.

Someday very soon, I will post a photo of a clear floor. If this had been an easy task, someone else would have done it long ago.

Has anyone else encountered group clutter in your organisation?


The cupboard is still full.